Home » About the Program » Leo Thorsness 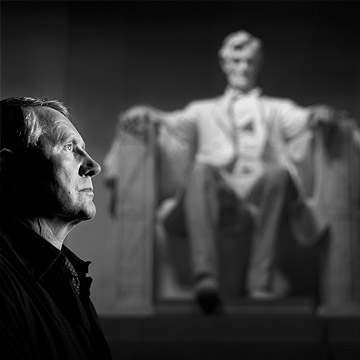 Leo Thorsness enlisted in the Air Force in 1952 at the age of nineteen, largely because he had a brother serving in Korea. Though he didn’t make it to Korea himself, he stayed in the military, becoming an officer and a fighter pilot. In 1966, he went to Vietnam as part of a squadron of F-105s. The “Wild Weasel” was a specially modified two-seat F-105 and had the job of finding and destroying surface-to-air missile (SAM) sites. The Weasels were capable of lingering in target areas longer than other fighters, and as a result suffered a high loss ratio; not many Weasel pilots completed their hundred-mission tours.

On April 19, 1967, Thorsness was on a mission deep in North Vietnam. He and his wingman took out an enemy SAM site with missiles, and then destroyed a second site with bombs. In the second attack, the wingman radioed that his plane, hit by intense antiaircraft fire, was going down. “Turn toward the mountains and I’ll keep you in sight,” Thorsness told him. As the pilot and his backseater ejected from the damaged aircraft, Thorsness circled above to keep them in sight. Suddenly, he saw an enemy MiG-17 fighter setting up a gunnery pass on the parachutes. Although the Weasel was not designed for dogfights, Thorsness attacked the MiG and destroyed it with bursts from his gatling gun.

Dangerously low on fuel, Thorsness quickly air-refueled from a tanker andreturned to the MiG-infested area to protect the downed crew from North Vietnamese soldiers. When his rear-seat weapons officer spotted four more MiGs in the area, he turned back through a barrage of North Vietnamese SAMs to engage them. He hit another one (although he never got credit for the kill because his gun camera had run out of film) and drove the remaining enemy planes away.

Heading for Udorn Royal Thai Air Base, the closest U.S. airfield, Thorsness climbed to thirty-five thousand feet. Seventy miles from base, with his fuel tanks on empty, he pulled the throttle to idle, knowing he could glide two miles for each thousand feet he fell. Just as he was landing, the F-105’s engine ran out of fuel and shut down.

Two weeks later, he was shot down over North Vietnam on his ninety-third mission. He bailed out and was captured, and wound up a prisoner of war in the “Hanoi Hilton,” where he ran into the two F-105 crew members he had tried to rescue. After two years of unremitting torture, he learned, through a secret “tap code” among the prisoners, that his name had been submitted for the Medal of Honor. (The officer in charge of writing Thorsness’ citation had been shot down himself and brought to the same prison.)

When the war ended in 1973, Thorsness was released and sent home. He had knee injuries, sustained when he had bailed out of his plane at six hundred knots, and back injuries as a result of torture. He received the Medal of Honor on October 15, 1973, from President Richard Nixon. “We’ve been waiting for you for six years,” Nixon told him. “Welcome home.”

After retiring from the Air Force as a colonel, Thorsness was an executive with Litton Industries and later served the people of Washington as a state senator. In 2002, he started speaking on his personal mantra, “Do what’s right—help others.”