Home » About the Program » Robert Modrzejewski 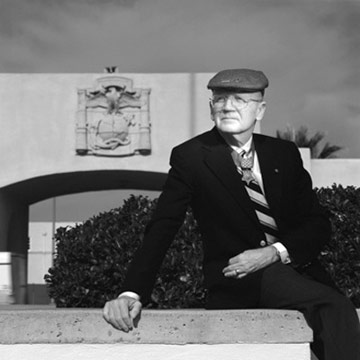 Robert Modrzejewski was a student at the University of Wisconsin when he joined the Marine Corps Platoon Leaders Class, the Corps’s version of the ROTC. He was commissioned a second lieutenant after graduating in 1957.

By 1966, he was in Vietnam, a captain commanding a company in the 3rd Battalion, Fourth Marines. On July 15, 1966, his unit was involved in Operation Hastings, an effort by Marines and South Vietnamese troops to block North Vietnamese units from infiltrating into the south through the demilitarized zone and Laos. After months of fighting a shadowy guerrilla enemy using booby traps and ambushes, Modrzejewski looked forward to what he thought would be the clarity of a larger engagement.

His company, which was to function as a blocking force for the other battalions involved in Operation Hastings, landed by helicopter and moved to their assigned objective in the dense jungle. Coming upon a well-entrenched North Vietnamese platoon, his men routed it and seized large quantities of ammunition and medical supplies. That night, a significantly reinforced enemy force counterattacked. It was so dark that Modrzejewski had to request that flares be sent up so he could get a sense of what was happening. In a chaotic three-hour battle, the Marines managed to fight off the North Vietnamese. This was the beginning of a two-and-a-half-day siege in which Modrzejewski’s dwindling force would have to keep repelling an enemy that was growing in strength.

The second night of the battle was fought at close quarters against a North Vietnamese force that was now battalion-size. Modrzejewski was wounded by shrapnel, but he managed to run and crawl two hundred yards to retrieve ammunition and provide it to a vulnerable part of his force. He later called in artillery strikes, which came within a few yards of the Marine positions.

By the third day, his unit had sustained many casualties, was surrounded, and was running out of ammunition. The enemy, now grown to the size of a regiment, attacked just before noon amid the noise of bugles and whistles and the explosions of mortars and automatic weapons. Facing more than one thousand soldiers, Modrzejewski reorganized his men for close combat. He called in air strikes again, calibrating them to hit so close that some of his men had to jump into a stream to keep from being roasted alive by napalm. Then, sometime before dark, for reasons Modrzejewski never fully understood, the North Vietnamese force broke off its assault and withdrew into the mountains.

After his tour of duty in Vietnam ended, he was assigned as the commanding officer of the Marine barracks at the Naval Academy, where he was informed that he would receive the Medal of Honor. It was presented to him on March 12, 1968, by President Lyndon Johnson, shortly before his announcement that he wouldn’t run for reelection.